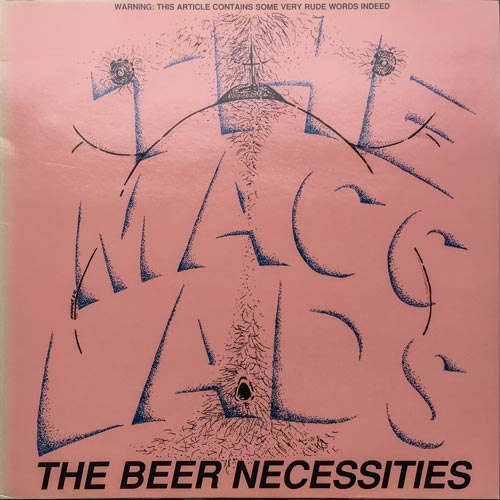 As the world’s most deliriously disgusting band ignite their fifth album with a chorus that you’re certain they must have used in the past…but they haven’t. “Gimme gimme gimme gimme alcohol,” they demand, and we are launched once again into a madcap world of sex and beer-fuelled mayhem, peopled by such delightful characters as “Fellatio Nelson,” “Man in the Boat,” “Two Stroke Eddie,” and the “Apprentice Dentist,” who you should simply hope and pray never turns up at your local surgery. In fact, you probably wouldn’t want any of the Macc Lads hanging around your house, your sister, your local bar…but ha! They probably are already, which is why you already know half the words to this album, before you’ve even played it through, and it doesn’t matter how ashamed you are of what you did last night, the Macc Lads did it worse. Good for them.

These are the only remaining new and unplayed 12″ vinyl copies in existence, and contain a unique and personally signed insert from The Macc Lads.

PLEASE NOTE: WE ARE UNABLE TO SHIP THIS ITEM OUTSIDE OF THE UK